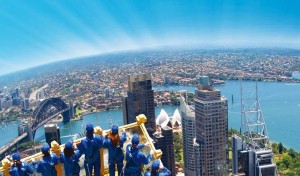 Travel & tourism in Australia contributed a record $197.5 billion to the economy in 2017, according to new research released recently by the World Travel and Tourism Council. The study was conducted in conjunction with Oxford Economics, and showed that travel and tourism’s contribution to global GDP outpaced the growth in the worldwide economy for the seventh year running.The direct, indirect and induced impact of travel & tourism accounted for 10.4% of global GDP along with 313 million jobs – one in 10 jobs across the world.

WTTC president Gloria Guevara said “travel & tourism creates jobs, drives economic growth and helps build better societies. “This is particularly the case in Australia… over the last few years Australia has led the world in the use of technology to drive tourism growth through visa facilitation, and has reaped the benefit through increased visitors,” Guevara said.

The report found that Australian outbound travel contributed a staggering 2.3% of total global expenditure, putting it in 8th position overall behind China, the US, Germany, the UK, France, Canada and Russia – all of which have significantly larger populations.

The WTTC said it was proud to continue to provide this “clear and empirical data” in order to help both private and public bodies make the right decisions for the future of a sustainable travel & tourism sector.