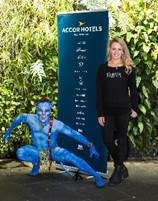 AccorHotels is pleased to announce a thrilling partnership with TEG and TORUK The First Flight by Cirque du Soleil which will be touring Australia and New Zealand for the first time from 1 September 2017 and performing close to 100 shows.

As the Official Accommodation Partner for Cirque du Soleil’s Australia and New Zealand tour, Le Club AccorHotels and Accor Plus loyalty members will receive access to pre-sale tickets, VIP opportunities and money-can’t-buy experiences which will include meet and greets and behind-the-scenes tours. Hotels will also be offering unique animations and benefits to guests when the show is in town.

Chief Operating Officer for AccorHotels Pacific, Simon McGrath said, ‘We are incredibly excited to be partnering with TEG who are well recognised for their entertainment portfolio and TORUK The First Flight by Cirque du Soleil who are world renowned for spectacular performances and entertaining millions around the globe.

Through a riveting fusion of cutting-edge visuals, puppetry and stagecraft buoyed by a soaring cinematic score, Cirque du Soleil applies its unique signature style to James Cameron’s imaginary world and “makes the bond” between two kindred artistic visions that capture the imagination.