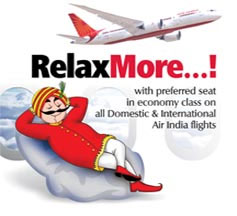 Air India is bringing India closer. The Indian national airline recently launched another nonstop flight to New Delhi from Sydney. This will increase the frequency of the Sydney-New Delhi flight to five times a week. The new flight will operate on Saturdays, whereas the existing ones fly out on Tuesdays, Wednesdays, Fridays and Sundays.

The new Saturday services continue to be operated by a two-class state-of-the-art, Boeing 787 Dreamliner, with 18 Business Class seats and 238 in Economy. The timings for the Sydney-Delhi flights are 10.45am on Tuesdays, Fridays, Saturdays and Sundays and 11.10am on Wednesdays. Air India also operates thrice-a-week nonstop services from Melbourne to New Delhi and back.

Generous baggage allowance of 30kg in economy class and 40kg in business class, a fleet of very young Boeing Dreamliner aircraft, a wide variety of entertainment and cuisine selection, top-of-the-line amenities and reliable timings makes Air India a great choice to travel to and from India.

There are other advantages of flying to India with Air India. The airline offers connections for free or at a nominal cost of around $50 to several cities within India. The free connections are between Delhi and Bengaluru, Mumbai, Kozhikode, Kolkata, Coimbatore, Kochi, Hyderabad, Chandigarh, Chennai, Trivandrum and Vishakhapatnam.

This additional flight to Sydney comes at a time when NSW received the highest number of Indian visitors on record in the year ending December 2017, which contributed $337 million in visitor expenditure to NSW. As per February 2018 results Indian visitors entering Sydney rose by 6.3%.

Anil Kaul , the new  Sydney based Regional Manager, Australasia  has many thoughts on further expanding Air  India’s presence in  Australia and expresses interest to work with the industry to move forward.