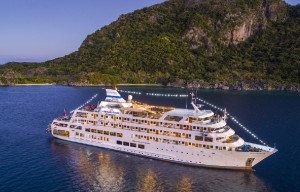 A record amount of ships making a record number of visits to ports around Australia has seen the value of the cruise industry surge past $5 billion for the first time, but sluggish growth for New South Wales spells crunch time for the nation’s gateway port, Sydney.

A new report commissioned by the Cruise Lines International Association (CLIA) Australasia has revealed that the Australian cruise industry’s national economic output surged by 15.4 per cent in 2016-17 to reach $5.3 billion, up from $4.6 billion in 2015-16.

It revealed that cruise line expenditure exceeded $1.5 billion, up 12 per cent on the previous financial year, while direct passenger expenditure rose 19.8 per cent to almost $1.2 billion.

The indirect and induced contribution of cruise tourism made up the rest of the figure with the industry’s suppliers and their employees contributing a further $2.6 billion, up 15 per cent on 2015-16.

With a record 58 cruise ships sailing local waters in 2016-17, and more than half offering local itineraries, there was a 19 per cent increase in cruise ship visit days to 1401 in total.

Highlighting the value of homeported ships, the report found that passengers spent on average $527 a day in a port before or after their cruise, compared to $153 during a transit day, adding up to a total of $976 million, or 85 per cent of total passenger expenditure.

While just about every area of the report showed positive signs, the international cruise industry has warned that infrastructure constraints in Sydney threatens further growth of the industry, resulting in economic benefits not being fully realised for Australia.

According to the report, New South Wales remains the dominant cruise state, accounting for 58 per cent of the industry’s economic contribution, but its 6 per cent growth last financial year means its share has dropped 10 per cent in just two years due to Sydney reaching capacity.

NSW’ sluggish growth had positive flow on effects for other states with Queensland up 14 per cent to now represent a fifth (21 per cent) of the national economic contribution or more than $1.1 billion, and Victoria experiencing a 12 per cent increase to take a 7 per cent share of the national contribution.

A 104 per cent increase to Western Australia’s coffers brought the State’s share of the national contribution in line with that of Victoria at 7 per cent, while Tasmania grew 138 per cent in total output growth to up its share to almost 3 per cent as Hobart and Port Arthur saw a spike in ship visit days.

“The industry is now contributing more than $5 billion to Australia’s economy but it could be much more. With the nation’s cruise gateway at crisis point, the challenge is to ensure strong economic growth for years to come and the only way to make that happen is to find a solution to Sydney’s capacity constraints.