India’s culture and cuisine received centre stage at the Bollywood-themed “A Week in India” food festival at the Shangri-La Hotel Sydney featuring renowned Sydney restaurateur Manjit’s @the Wharf at Café Mix from 23 to 27 November 2016. 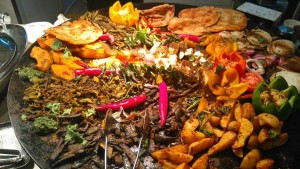 A bountiful and colourful buffet spread featured the marinades, curry and base sauces from Manjit’s secret family recipes, which have been synonymous with Indian food in Sydney for over 30 years. A sumptuous dessert station tempted diners with Indian sweets, including favourites such as Gulab Jamun, Mini Kulfi, Mithai Barfi and Halwa. Chef Sorensen was thrilled to share his kitchen with Chef Gujral, one of Australia’s most admired Indian chefs who follows a family-food tradition spanning over 100 years.

During the festival, Café Mix was decorated in true Bollywood style – with bright, floral and extravagant furnishings and decorations reflective of the traditions of the fabled Maharaja era.

Over 75 guests comprising of travel agents, airlines, hoteliers and industry personalities dominating the India- Australia tourism spectrum attended the ‘Culinary Diversity of India’ event on 23 November 2016 at the waterfront Manjit’s Indian Restaurant. The guests watched a video clipping from Saransh Goila, a celebrity chef in India, heard from B. Vanlalvawna Indian Consul General Sydney  and  Kanchan Kurkeja Director India Tourism Sydney , received a wonderful presentation  from Laura Cuthbert from Wendy Wu Tours about their itinerary to India and other parts of Asia, learnt about Indian food experience from journalist Fiona Caulfield and traditional Indian cuisine from celebrity chef Sandeep Chatterjee and picked up knowledge on modern trends in Indian eats from Manjit’s chef de cuisine, Varun Gujral while tickling taste buds with several dishes from various regions of India, specially prepared for the evening. Lawyer, speaker and ABC radio and television personality Pallavi Sinha did the anchoring for the evening’s proceedings. Shankar Dhar Vice Chairman AITTC kicked off the event with an opening note while Phillip Boniface Co Chairman & Treasurer tendered the vote of thanks and organized the lucky door prizes generously offered by Taj Hotels & Resorts, Wendy Wu Tours and Air India; Mary Anderson from the airline also speaking about greats fares from Air India to India and Europe. 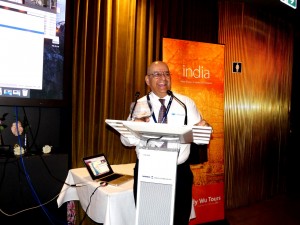 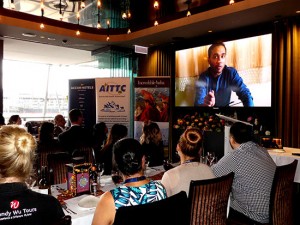 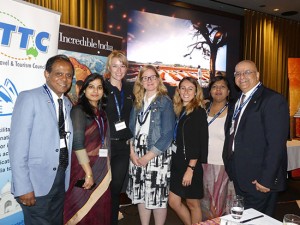 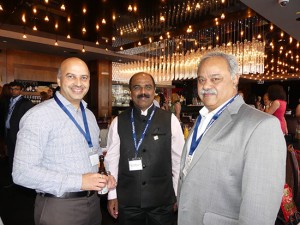 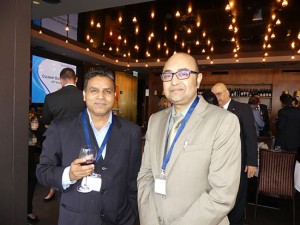 According to AITTC Chairman Sandip Hor, the idea behind this initiative is simple and straight forward. It’s to pass on enhanced knowledge about Indian cuisine and to motivate Australians, who love Indian food like rest of the world does, to visit India and experience a  pleasing encounter with variety of food while savouring others touristic charms of the vast nation.

Continuing the positive trend, arrivals from India to Australia during the month of September 2016 increased by 21 per cent, to 19,500 visitors. Total arrivals for the year ended (YE) September 2016 were 249,200, an increase of 9.6 per cent relative to the same period previous year. This makes India the 9th largest inbound market for arrivals for the year ended September 2016. For YE June 2016, Indian visitors contributed A$ 1.1 billion to the Australian economy, an increase of 6 per cent over the previous year.

Indian cuisine ranks among the top five popular cuisines in the world. It is judged as the most diverse, the diversity in food being almost in direct proportion to the nation’s diversity in the geography, language, customs and culture. In line with our strategy for ‘Know India Better’ program, this notion inspired us to organise an event on culinary diversity of India. The idea behind this initiative was simple and straight forward- to pass on enhanced knowledge about Indian cuisine and to motivate Australians, who love Indian food like rest of the world does, to visit India and experience a pleasing encounter with variety of food while savouring others touristic charms of the vast nation. So on 23 November evening, one of Sydney’s most elegant; waterfront Indian restaurant Manjit became the centre stage of showcasing India’s culinary diversity. The successful function was hosted by us in partnership with India Tourism and Wendy Wu tours and was attended by a selected audience representing the industry. 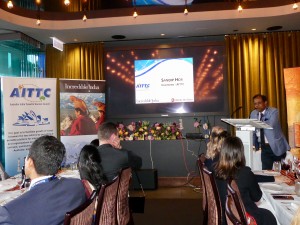 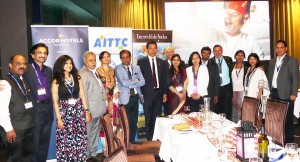 As we are approaching the calendar year end, it’s time to report how AITTC has fared in 2016. To express in one word – GREAT.

However what has been most significant is signing of a corporate partnership arrangement with world famous French hotelier group ACCOR. We all know ACCOR is one of the largest hotel group in the world. They have strong presence in both Australia and India. A reputed institution like ACCOR recognizing AITTC strengths and capability is a monumental achievement for AITTC.

During the year our presence in the industry has been widely recognized. Some of our members, including myself, were invited to attend major travel trade shows and seminars in Australia and India like Luxperience, Gujarat Travel Mart and Kerala Travel Mart. Also pleasing to say that many of our members were nominated for various industry awards, latest being Reena Tory from Mantra Wild Adventures shortlisted for Women in Travel Awards.

So overall it has been a good year for AITTC with all your support and assistance which I hope will continue for next year.

I conclude by wishing all the best for the festive season ahead and a happy and prosperous 2017.

MELBOURNE has been crowned the world’s Sports City of the Decade in a glowing endorsement of Victoria’s major event magnificence.Nation’s sporting capital is now the toast of the sporting world after scooping the pool at the Ultimate Sports City awards in Switzerland recently. The Award caps a historic decade-long legacy of hosting some of the world’s most sought-after sporting events which includes 2006 Commonwealth Games, 2007 FINA World Swimming Championships,2015 ICC Cricket World Cup and 2015 AFC Asian Cup.The city is home to Boxing Day Cricket, Australian Open Grand Slam, the Australian Formula 1 Grand Prix, the MotoGP and a long list of blockbusters other cities can only dream of staging

Sydney Film Festival is one of the world’s longest-running film festivals, and is a major event on the New South Wales cultural calendar. The 12-day Festival from 8-19 June will screen feature films, documentaries, short films and animation from around the world in venues across the city including the prestigious State Theatre.The flagship program of Sydney Film Festival is the Official Competition, which was established in 2008 and celebrates ‘courageous, audacious and cutting-edge’ cinema. The Sydney Film Prize and $60,000 cash is awarded by a jury of five Australian and international filmmakers and industry professionals to the winner

Running 27 May to 18 June, Vivid Sydney boasts to be the world’s largest festival of light, music and ideas featuring many of the world’s most important creative industry forums, a mesmerising free public exhibition of outdoor lighting sculptures and installations and a cutting-edge contemporary music program. Vivid Sydney is where art, technology and commerce intersect. Vivid Light transforms Sydney into a wonderland of ‘light art’ sculptures, innovative light installations and grand-scale projections for all to enjoy – for free. It is a magical celebration of light-design excellence and the world’s largest outdoor ‘art-gallery’: a unique Vivid Sydney experience while Vivid Music presents a cutting-edge contemporary music program and Vivid Ideas bringing together business and creative leaders for professional development, information updates on their industries, market opportunities and innovation:

“This is fantastic news. We’re delighted Sydney has been named the number one destination by travellers on TripAdvisor, cementing its position as Australia’s most loved city,” Mr Ayres said.

“Sydney is a sophisticated global city that is constantly evolving, with major tourism developments including the International Convention Centre Sydney (ICC Sydney), Barangaroo and a spate of new hotels and refurbishments as well as growing creative precincts like Eveleigh and Parramatta.

“We have one of the best jobs in the world in telling Sydney’s story to the world and we urge people who haven’t been to Sydney for a few years to come back and see how much we have to offer as a great place to visit and invest.

“As well as major events on our calendar, we will continue to showcase Sydney’s stunning natural beauty, fantastic food and wine, creativity and attractions as well as surrounding NSW regions to TripAdvisor travellers.”

In the year ended December 2015, Sydney welcomed over 33 million domestic and international visitors who spent $16.5 billion.

More than 1000 airline, airport and tourism delegates from 100 countries will gather in Brisbane in March 2018 for Asia’s leading aviation route development forum.A consortium of tourism advocates, including Brisbane Airport Corporation, Brisbane Marketing, Tourism and Events Queensland, Brisbane Convention & Exhibition Centre and Trade and Investment Queensland, combined forces with Tourism Australia to bring this fiercely sought after conference to Queensland. The event will bring together some of the largest carriers from the Asian region as well as airports and tourism authorities over three days from 18- 20 March 2018 at the Brisbane Convention & Exhibition Centre.

Tourism Australia’s innovative use of ‘Virtual Reality’ (VR) and 360 degree video is hitting the mark with consumers and travel sellers eager to get a more immersive experience of Australia’s best aquatic and coastal experiences. Tourism Australia has published 17 Virtual Reality scenes as 360 degree videos online and so far recorded 6.5 million views across YouTube, Facebook and Australia.com. Significantly the aquatic themed videos have helped to drive a 64 per cent increase in engagement on Australia.com and leads to industry have grown 77 per cent.

“This is about giving consumers and potential travellers to Australia a deeper, more immersive experience of our destination,” said Tourism Australia Managing Director John O’Sullivan.

The new ‘immersive assets’ also provide a powerful selling tool for frontline travel agents and trade partners to better understand experiences that are available to holiday makers and therefore nurture leads and encourage more customers to book a trip to Australia.

Tourism Australia has also published a free app for Google Cardboard headsets for both Android and Apple smart phones with the ability to choose from 17 aquatic and coastal VR videos to download.