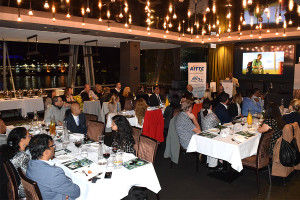 Highlight of the period was another Know India Better presentation by AITTC, designed to increase awareness about India as an exciting travel destination. Thanks to Eric Finlay from Adventure World and Thushara Liyanarachchi from Taj Hotels & Resorts for partnering with us to make this event most informative for the trade and media who attended the dinner function at Manjit’s at the Wharf in Sydney.

Surely tourist arrivals in India from Australia are showing steady increase and I feel proud to have AITTC as a part of this success story.

On the other side, numbers are looking good as well for tourist arrivals in Australia from India. While Sydney now glittering with Vivid lights, it was pleasing  for me to notice many Indians beating the winter chill and wandering from site to site for an enjoyable engagement with the illuminated version of the city. I am sure many of them in the crowd are visitors from India as the word of Vivid magic has well spread in India as a draw card for visiting Australia. Thanks to Destination NSW for their great marketing effort in India.

Widely and highly, India as a target market is currently being referred at various forums. In the last edition I mentioned how extensively India’s potential to influence Australian Tourism market was discussed at the Australian Tourism Exchange in Adelaide. Recently at the Future Asia Business Summit, organized by City of Sydney, India’s potential for both inbound and outbound business, including tourism was highlighted.

Before concluding let me reinstate that Indian cricketers are coming down under this summer. So let’s work on strategies to use ‘cricket’ as a catalyst to draw more visitors from India during the season.  AITTC help is available to work on this with state tourism agencies and tour operators in Australia and India.