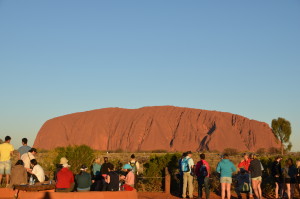 Located in the middle of nowhere in Central Australia in Northern Territory, Uluru is an icon of Australia. The planets largest single monolith is not only a natural wonder, but a site of utmost sacredness of the indigenous Anangu community who are its traditional owner.

Climbing Uluru is now set to be a thing of the past after the Uluru-Kata Tjuta National Park board decided unanimously to ban the activity, starting in 2019.The board, made up of eight traditional owners and three representatives from National Parks, made the decision after consulting with the wider Anangu community, who it said was overwhelmingly in support of banning climbs.

Senior traditional owner and chairman of the park board Sammy Wilson was at Uluru for the announcement and in a written speech said the site had deep cultural significance and was not a “theme park”.

“Some people in tourism and government for example might have been saying we need to keep it open but it’s not their law that lies in this land,” he said.

“It is an extremely important place, not a playground or theme park like Disneyland.

“The Government needs to respect what we are saying about our culture in the same way it expects us to abide by its laws.

The ban will begin on October 26, 2019 to coincide with the 34th anniversary of the return of Uluru to traditional owners.