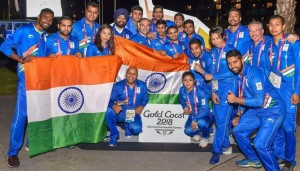 The 12 day Commonwealth Games in Gold Coast ended on 15 April with a happy note – Australia ranking first and India coming third among 71 participating commonwealth nations. Celebrity chef Saransh Goila who participated once in a food-related AITTC event enjoyed an early taste of the approaching Commonwealth Games while dining at one of the Gold Coast’s premier restaurants with Indian-Australian wrestler Rupinder Kaur Sandhu who represented Australia in wrestling in the 50kg category. Goila was in Gold Coast filming his latest on-line show Run to Eat.

Tens of thousands of Indian tourists visit the Gold Coast and Queensland annually making it one of the strongest-growing sectors in Australian tourism.

Indian visitors are always eager to immerse themselves in destination experiences including nature parks and the Great Barrier Reef while also finding authentic Indian cuisine complemented by fresh Queensland seafood and produce.

“Indians love the Gold Coast, so it was not hard to convince anyone to come to Queensland and cheer me once I was selected for the Commonwealth Games,” Ms Kaur Sandhu said.