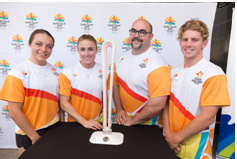 The Commonwealth Games will be held in the Australian city of Gold Coast in April 4-15 next year. The Gold Coast 2018 QBR was launched on the Commonwealth Day of March 13 this year at the historic forecourt at Buckingham Palace in London with Her Majesty Queen Elizabeth II placing her ‘message to the Commonwealth and its athletes’ into the distinctive loop-design Baton which then set off on its journey around the globe.
The Gold Coast 2018 QBR is set to be the longest in Commonwealth Games history. Covering 230,000km over 388 days, the Baton is making its way through the six Commonwealth regions of Africa, the Americas, the Caribbean, Europe, Asia and Oceania. The Baton reached India from Pakistan in October.
The Baton is scheduled to arrive in Brisbane from New Zealand on Sunday, December 24.. It will then spend 100 days travelling through Australia, finishing its journey in Gold Coast at the opening ceremony on April 4.