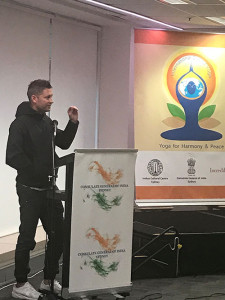 Indian Cultural Centre at the Consulate General of India, Sydney conducted a series of Yoga promotion activities like workshops, lecture demonstration, seminars and discussions etc. as part of International Day of Yoga, 2017 celebrations. Three Yoga workshops / talks were hosted at the Indian Cultural Centre wherein topics related to body types, balanced diet for different body types, breathing techniques, mediation sessions etc. were discussed at length and conducted by the resource people from organizations like the Art of Living (Sydney), Spirit of India and Brahma Kumaris (Australia).

These workshops were conducted as run up events to IDY 2017 celebrations. To mark the 2017 International Day of Yoga, an open Yoga session based on Common Yoga Protocol prepared by the Ministry of AYUSH, Government of India was hosted by the Indian Cultural Centre on June 17 in The Consulate General of India, Sydney. During the event, Minister for Multiculturism and Disability Services of NSW Government, Michael Clarke , former Australian Cricket Captain and the Consul General wished the participants on the occasion and spoke on the benefits of practicing Yoga regularly. The day was also celebrated in Adelaide where Yoga enthusiasts of the city participated along with the Lord Mayor of the City of Adelaide and ex-Australian cricketer Wayne B. Phillips.