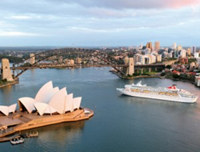 Rising international passenger numbers and a thriving retail sector have helped deliver strong half-year results for Sydney Airport, which this morning revealed earnings of $577.6m in the six months to 30 Jun.Its earnings before interest, tax depreciation and amortisation (EBITDA) were up 7.7% on the same period last year, on passenger growth of 3.6%.

“Key drivers of the result were international passenger growth of 7.7%, returns on capital investment in aviation infrastructure, and a strong contribution from retail due to solid trading and new shop openings in T1 and T2,” said SYD’s outgoing ceo Kerrie Mather.

“The inbound tourism market has seen strong growth of nearly 10% for the half and the rolling 12 months, with excellent performance from a diverse range of major Asian markets including China, India, Philippines, Indonesia, Japan and Vietnam.”Total passenger numbers in the first half reached 21 million, up 3.6% on the same time last year.Domestic pax were up 1.3% to 13.2 million, while international pax increased 7.7% to 7.7 million.