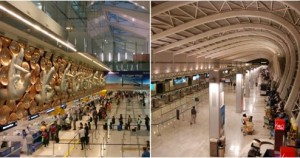 In a proud moment for India, two of the country’s famous airports have been ranked among the best in the world for their quality of services in a global passenger survey.

Mumbai’s Chhatrapati Shivaji International Airport and Delhi’s Indira Gandhi International Airport has been ranked number one by the Airports Council International (ACI), a trade association of 1,953 airports in 176 countries. Both of these airports beat Beijing and Shanghai Pudong airports which tied for number two. The annual airport service quality (ASQ) awards held by the ACI on Tuesday revealed that both Mumbai and Delhi airports emerged top winners handling a whopping 40 million passengers every year each.

What are the parameters the airports were ranked on in the global passenger survey?

The ASQ is currently the only worldwide programme to survey passengers at the airport on their day of travel reports the Times of India.

All airports are ranked based on a survey. This survey has a sample size of millions of passengers, who give their honest feedback on 34 parameters. These include several key performance indicators from airport access, check-in, rest rooms, cleanliness and baggage handling to shopping, internet facilities and many more