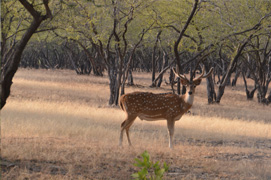 Recently Deep Kalra, the founder of MakeMyTrip.com suggested the emerging entrepreneurs to be prudent with the capital invested in their venture and the imperative need of the Indian companies to do well to meet the onslaught of the foreign multinationals.He said India was sitting on the cusp of a travel revolution, attributing it to social media. Speaking at IAMAI’s 12 India Digital Summit, Kalra remained optimistic about the future of the startup ecosystem in India and in the ability of the present crop of entrepreneurs who have good business models and great ideas.

The prudence lies in capitalising well as I have seen companies with good ideas fizzling out due to the lack of it. Foreign capitals come easy but dry up equally fast.

Holding a great future for the Indian travel industry, Kalra said that outbound travel alone from India would peak to 40 million by 2020.

Today Indians are travelling like anything, both inbound and abroad, with airlines, hotels witnessing almost full occupancy. This is largely because of the social media phenomenon making tourists more aware of places and desire to travel.

Mobile revolution has also been a game changer for the travel industry and MakeMyTrip alone has seen 70 per cent on mobile and of that 70 per cent, 90 per cent is from app.

Responding to a query, he said medical tourism is also contribution to the overall growth and bookings in guest houses along the hospitals in NCR region had been overwhelming.

Speaking at the event, Paytm Founder, Vijay Shekhar Sharma made a strong pitch for the Make in India initiative, stating that the time was ripe for creating an Indian model which would be the envy of the world. Recalling his struggling days and the quest to build Paytm, Sharma said his company did 255 million transactions last month and would achieve 14 billion gross merchandise value during this ongoing fiscal.

Sharma, who brought about a revolution in the digital payment ecosystem, lauded the government’s initiative on the economic front, stating that in the seven years between 2018 and 2025, India would add USD 2.5 trillion to the economy and the digital industry would contribute a substantial amount to this growth. Sharma, in particular, noted the accomplishments of Flipkart founder Sachin and Binny Bansal who changed the country’s ecosystem.