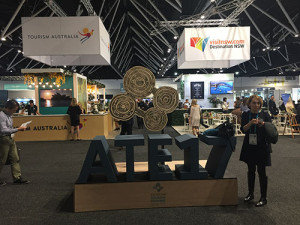 Tourism Australia’s 38th annual business-to-business event for building future tourism opportunities for Australia – the 2017 Australian Tourism Exchange (ATE17) was held in Sydney in May bringing together more than 2,500 travel industry delegates from more than 30 countries, making it the biggest ATE event in nearly a decade.

There was a strong representation from India comprising of several buyers and media from different parts of the country.

The event, which kicked off on Monday 15 May saw more than 700 travel wholesalers and retailers (buyers) from 548 companies from Asia-Pacific, the Americas, Continental Europe and the United Kingdom meet and do business with 555 Australian tourism businesses. Tourism Australia worked with host-state partner, Destination New South Wales (DNSW), supported by airline partners Virgin Australia and Etihad Airways to deliver ATE17.

Tourism Australia Managing Director John O’Sullivan said it was a great time to be hosting ATE in Sydney.

“The economic impact of ATE is significant and will directly help to bolster Australia’s inbound tourism sector, which is already experiencing record growth in international visitor numbers as they exceed more than 8 million in 2016 and $39 billion in visitor expenditure,” Mr O’Sullivan said

“As many as 50,000 business appointments are held during ATE, providing an invaluable opportunity for Australian tourism businesses to connect with key international travel wholesalers and retailers responsible for putting Australian holidays in the hands of consumers in our key overseas markets.

“The connections made at ATE help deliver around three million visitors each year, spending up to $8.5 billion whilst they are here, thereby helping to further grow our visitor economy.

“This year’s ATE is particularly timely as it coincides with the 50th anniversary of the establishment of Tourism Australia’s predecessor, the Australian Tourist Commission – the Australian government’s first agency solely dedicated to marketing Australia to the rest of the world.

“Holding ATE at the newly opened $1.5 billion ICC Sydney is also timely as it is one of many new infrastructure developments that is encouraging unprecedented investment in the city’s hotel sector – further bolstering Sydney’s and Australia’s credentials as a world-class tourism destination,” Mr O’Sullivan said.

The immediate economic benefits of hosting ATE in Sydney include an immediate injection of $10 million in to the local economy during the week of the event. In the longer term, ATE will assist the Australian tourism industry to reach its Tourism 2020 goal of growing overnight expenditure to more than $115 billion annually by the end of the decade.